Visiting Salt: I was taken aback by the beautiful Rozana. The story was elusive, the motif Levantine. The collection followed. 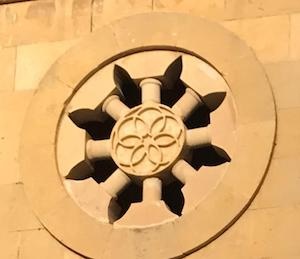 It all started with a visit to the beautiful city of Salt in Jordan.

It happened to be Jordan's Independence Day and how nationalistic we all felt, donning the flag in jewellery and wearing local costumes.

We walked around town, and were shown things familiar only to locals from the city. This is the house of so-and-so , this building dates to this era....yes, we all knew the names of the families, we knew them well.

Salt is the twin city of Nablus, to which it bears a striking resemblance. Built on two hills with a valley in between, the landscape and views across the city are breathtaking.

You definitely need to be fit to walk down to the city centre and then back up the stairs again!

A striking feature is the architecture built from local stone with a distinct yellow hue. Anyone interested in architecture will immediately notice the dexterity of the stone work in the masonry.

Arches abound, vaulted walkways, high ceilings and long windows which betray a lifestyle which can only be imagined as aristocratic. How fascinating it was to hear of the history of the city and the influence of it's citizens on the history of modern Jordan.

Many things fell into place as I recalled the people from the names of the families mentioned: Abu Jaber, Saket, Mouasher, Kawar, Arabiyat, Najdawi, Hmoud....

I was taken aback by the beautiful Rozana.

The story was elusive, the motif Levantine.